To wrap your head around empathy in sales, let’s engage in some roleplay – you’re Charlotte, a marketer who badly needs SEO support for your content. I’m Roshan, the salesperson who’s reaching out to you to see if you’d be interested in subscribing to the services offered by Betalinx, a make-believe SEO agency that I work for.

I have two different pitches ready for you. Tell me what you think of the first:

Sounds promising enough, right? Now let’s take a look at the second one:

So what do you think of the second pitch? Does it ring better than the first?

Let’s find out the real reason why the latter is more likely to hit the mark.

Look at the two sales pitches again. What’s the difference? The real difference between them is not what the sender says but the reaction it elicits in the reader’s mind.

Put yourself in Charlotte’s shoes and think for a moment about the first pitch. You probably thought –

Here’s a guy from an SEO agency. Sounds like they’re popular in their space. Received loads of awards, I see. Not really sure if it’s worth it though…

Now do the same for the second pitch. This time, you might have thought along the lines of –

Hey, this dude read that blog I put a lot of effort into. Sounds like he’s done his research and sort of gets how disappointed I am about its reach since he’s come across the same problem too. Looks like he can help me get more eyes on it? Let me see what he can do.

The second pitch is empathic towards Charlotte. And that’s why she’s more likely to respond to it. He isn’t offering help just because he’s identified a problem, but because he understands how she feels.

That, right there, makes a lot more difference than you might think.

The Solution: Empathy in Sales

First of all, what really is empathy? Why are people making a fuss over it?

To better understand the role of empathy in sales and how salespeople can use emotional intelligence, I spoke to Marc Belgrave, Growth Advisor at GrowthRobot. Marc defined empathy as the ability of a salesperson to place themselves in the mind of the listener.

When I asked him how important empathy is as a skill for salespeople, here’s what he had to say:

“Empathy is the #1 trait that makes a great salesperson. Salespeople can not only use it to anticipate what’s going on in the mind of the client but can also trigger empathy in the client so that they relate to you and place trust in you.”

To back it up, take a look at this Linkedin poll conducted by Gong, a Revenue Intelligence platform, to find the most important quality for a sales leader to have. And guess what came first?

Clearly, empathy is a must-have for salespeople.

Even so, the average salesperson is not entirely aware of how they can use empathy/emotional intelligence while conversing with their clients. And that isn’t surprising, because the average company spends $10K – $15K hiring an individual and only $2K a year on sales training.

What’s even more interesting is that you might already be using similar tactics in your calls and emails unconsciously. For example, certain simple greetings you add routinely to your message actually go a long way in getting you a reply.

But before you edit all your email templates to add variations of “Hope all is well” and “Hope this email finds you well”, why not take a moment and think about what you can do with this information?

If a simple greeting like that can make such a huge difference, why not leverage something much more powerful to effectively connect with your prospects?

That’s where empathy can help you out. Empathy doesn’t lie in the “How are you?”s and “Hope all is well”s. It’s a much more powerful bond between you and your listener that subconsciously brings both of you on the same page.

Let’s find out how to really use empathy in sales to connect with your customer.

The Anatomy of the Customer’s Brain

Learning a bit of psychology never hurt a salesperson.

When I asked Marc about it, he said empathy alone isn’t likely to get somebody to pay attention to your outreach. How many times have you responded to somebody solely because they reached out to you and said they understand and feel your painfully lousy design/SEO skills?

Not many, I suppose.

People don’t respond to you because you’re empathetic. People respond to what they find useful. However, your empathy could be the medium for you to understand how you can make yourself useful to them.

Additionally, to sell to someone, you have to put yourself in their shoes. Empathy is about feeling what they are feeling.

Take a look at some of the clips in this video:

Notice how you cringe at some of the clips where they hurt themselves? How is it possible for you to feel their pain even though you’re not the one getting hurt? The culprit is none other than your mirror neurons.

Mirror neurons are widely believed to be the neurons responsible for empathy, as well as other related concepts that arise from imitation, such as vocalizations, language, gestures, and, expressions. The mirror neurons fire off when you see somebody take an action or experience something that you can relate to.

These neurons detect similarity and relatability. When a prospect finds this similarity in you, it signals to their subconscious that you are like them. This, in turn, bolsters their trust in you.

Dr. William Maddux led a team of behavioral scientists and conducted an experiment on MBA students to understand the role of mirroring in business.

He asked the students to participate in negotiation exercises and asked some of the students to subtly mimic the actions of those that they negotiated with. The results were astounding.

That’s how powerful mirror neurons are.

How You Can Make Use of Empathy in Sales

You might now be wondering what any of this means for you. I mean, can somebody really learn empathy in sales? Isn’t it supposed to come naturally to us? When I asked Marc about this, he disagreed. In his words,

“Empathy is 50% nature and 50% learning. Most people are naturally empathetic. And most others can acquire it with a bit of practice.”

If that’s true, how can you effectively learn and apply empathy in sales processes? Here’s how:

That’s right. The best way to cultivate empathy as a habit is by making use of the mirror neurons we just spoke about in the previous section.

So how can you trigger empathy in your prospects? By mirroring them! There are five common ways you can use mirroring in sales.

Never copy your prospect’s accent or negative body language. Mirroring requires you to be careful and subtle. The last thing you’d want is for your prospect to think you’re mocking them.

The Don’ts of Using Empathy in Sales

Empathy isn’t about adding emoticons and exclamation marks at the end of your sentences. It’s not about engaging in unnecessary small talk before getting to your pitch.

Empathy is a complex emotion that can’t be understood in a sentence—and that’s why so many people misunderstand it. Let’s take a look at how to avoid practicing empathy in sales the wrong way.

Empathy is NOT Sympathy

In my conversation with Marc, he emphasized on the fact that sympathy is external while empathy is internal. When you’re being sympathetic or sorry for someone, you don’t actually feel their pain. Empathy is when you’re able to internalize and understand what somebody is going through.

This doesn’t mean that you need to have gone through what somebody else is going through in order to understand their pain. Recalling a similar experience alone may be sufficient to trigger your empathy.

“Great salespeople are like great actors. They have a library of experiences in their head that they use to bring life to the emotions that they express on screen. That’s why some actors are able to cry so realistically on screen.”

Empathy is NOT Scripted

Rote empathy is when you’re mechanically using statements and gestures in order to try and appear empathetic. Empathy doesn’t work that way. You can’t just say “Hope you’re doing well in these trying times” in the name of empathy and call it a day.

Empathy is a complex connection that you form with somebody over time. You can neither force it nor rush it. Sometimes, that connection is made within minutes, while sometimes, it could take a few conversations before you see it.

Whatever be the case, empathy should be prioritized above all else during prospecting. Take a moment to understand your prospect and the challenges they are facing before you send them the quote

The Future of Empathy in Business

Even computers are beginning to catch up to the power of empathy, thanks to the slowly emerging AI-powered systems referred to as affective computing or emotion AI. These human experience platforms are designed with an emotional quotient (EQ) to better understand human needs and emotions.

However, eventually, nothing beats natural empathy. While stats and numbers definitely hold priority in B2B selling, it helps to remember that B2B clients, just like B2C customers are human beings with emotions and feelings. 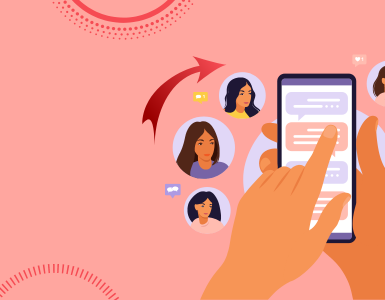 The chances of getting a response from the first email you send your prospect are lower than Tim Storms’ lowest octave. However, sales follow-up strategies are precisely what you can use to get your prospects to respond...

Roshan Nair
6 min read
We use cookies to ensure that we give you the best experience on our website. If you continue to use this site we will assume that you are happy with it.Ok